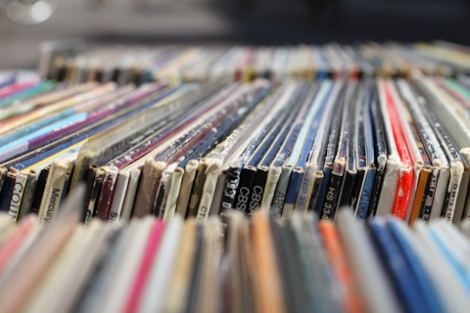 I killed some time browsing the record shops in Berwick Street, examining beautiful vinyl that I had no means to play, then went looking for somewhere to sit down. I’d been walking all day. My legs ached. Mortality was waving at me cheerily.

I found a café dingy enough to be safe from Marina. It was half-full – or half-empty, depending on your natural disposition – with people who looked ‘London’; workers on a break, locals having a brew. It felt delightfully free of tourists.

I nodded at the bored server as I entered and took a seat in the window. He brought over a menu. He was pretty. I gave him an explorative smile, but he only half-returned it. Losing my touch. I ordered some tea and perused the fried delights on offer.

Images of sitting with Sophie in Maggie’s Café in Lewisham – the best place for breakfast in South London – filled my head. Soph grinning gleefully as a plate pilled impossibly high with food she wouldn’t make the slightest dent in arrived. The list of items you could order in Maggie’s was epic and Soph always got carried away.

There was a life I had walked out on, back in Deptford, with Soph. We’d been a little gang of two – until I ruined it.

The tea that arrived was the inevitable pale cup of disappointment. Right now I could be lounging on the sofa being ‘forced’ to watch rubbish on TV, eat improbable amounts of toast and drink gallons of Sophie’s dark and serious tea.

Instead I was avoiding Marina, again, and wondering just how out of my depth I really was.

My seat gave me a good view of the comings and goings of the street. The people were more enjoyable to watch from a distance. There were so many of them, milling about, making plans, lost in thought, on a mission, dawdling, chatting, taking selfies against the bright shop windows.

He strode through them as though the street was empty; somehow a path seemed to clear before him, without anyone apparently taking much note of his passage; his long coat flapped after him, the air sizzled briefly with electricity.

He was gone from sight.

Before I could think much about what I was doing, I had dug in my pocket for some coins, throwing them on the table next to the tepid tea I was abandoning, and was dashing off down the street on the hunt of the fizzling aftereffect of his presence.

I caught a glimpse of him turning a corner, ran to it, dodging in and out and around the people in my way.

His coat was flying in the distance – I trailed after him, running at full pelt, but somehow not managing to make up ground. He disappeared around another corner.

I spotted him again in Leicester Square. Everyone in the world was determined to be in my way. I crashed through groups desperately, trying to keep his coat in my sights, to keep my nose on the crackle of energy still sparking in his wake.

I thought I saw him head down a side road, but when I got to it, it was empty of him. I turned all around, trying to sense where I’d gone wrong, but the trail felt cold, dead.

I slumped against a wall in disappointment, my chest heaving from all the running.

The street grew very suddenly and improbably dark and quiet. I looked up, expecting a serious storm cloud to have caused such a shadow, but the sky was still a bright September blue.

“I hope,” he said icily, “that there is a good reason why Gallows has set you to follow me.”

He was bedside me, composed and imposing, his dark sweep of hair falling perfectly, his eyes burning an angry blue. He was as beautiful as I remembered from our previous meeting, handing over the Book of Alice.

“Marina didn’t send me,” I said quickly. I was messy, disheveled, sweating.

“No,” I promised, feeling utterly foolish, totally ridiculous. “I’m sorry. It wasn’t planned. I just saw you and felt… compelled to follow.”

“Compelled? Why? In what way?”

“I don’t know,” I said hopelessly. He fixed me with unbelieving eyes. “It’s like a magnetic pull,” I faltered, flushing. “You’re just so… handsome.”

His mouth twitched for a brief instant, but he held off the smile.

“Marina Gallows’ lackey just happens to feel ‘compelled’ to follow me and stick his nose into my business?”

“Honestly,” I said earnestly, “it’s got nothing to do with Marina, nothing at all. It was just me being an idiot. I followed you on a whim. I wanted to…”

“Offer you a drink,” I finished lamely, wishing a chasm would open in the pavement and swallow me whole.

He did smile then. He was clearly thoroughly amused.

“Don’t be,” he said, quite kindly. “I’m flattered. You’re far too young for me, of course, and I’m in the middle of some very important work. And Gallows certainly would not appreciate us fraternizing.”

“Clearly there are things she hasn’t told you.”

“Sounds about right,” I agreed.

“Which makes it an excellent idea for us to meet up and get to know one another.”

He reached into his coat, pulled out a business card. He held it out to me, smiling dangerously, his blue eyes dazzling. My heart was thumping alarmingly in my chest. I reached out to take it and felt a fizz of energy as I neared his hand.

“Call me in a week,” he commanded, and strode away down the street.

He vanished into the shadows.

The light and noise returned, filtering back smoothly.

People bustled around me, as I stood still in the sunshine, looking at the card in my trembling fingers.

Fragments, work-in-progress and bits and pieces by Luke Bowyer.